Half-conscious by now at the stony path, Ulises called it all back to mind, those South China Sea days at Da Nang. Somehow, the anguish of recall hurt deeper than his bleeding wound. Was it that a dying soldier becomes crushed by memory?

The remembrance stream took him back again to the somber morgue building as it sat all by itself in a corner at the northeast perimeter of the huge military compound by the shore under the Monkey Mountain radar sites. It was a secluded but well guarded area north of the lunated bay.

The US Army Special Operations Command had quietly set up the mortuary Quonset in the isolated stretch of the coast, accessed only by a narrow, hard sand road.  Anyone who was to do business there required a special security clearance.

So as not to attract much attention –Ulises figured out– no checkpoint or fences surrounded the morgue. Only a rustic Off Limits sign on a fence pole near the entrance. But in Nam at such a time, no security was ever bullet-proof

Captain Ruddy Cardenas ordered Duque to visit the shut out morgue for a discreet pickup of documents. He was to collect maps and diaries found on the cadaver of an elderly Viet Minh cadre, kidnapped a month before from the Hue University campus where he disguised as a geography professor. A mixed team of US Army and South Vietnamese commandos abducted, interrogated and tortured the aging partisan to death.

The abductee’s body ended up at lieutenant Santos’ morgue for stealthy disposition. Such cases were disposed of even more expeditiously in a small crematorium behind the Quonset. Ironically, the Viet Cong cadre’s body laid in a refrigerated vault side by side with the face-masked commando colonel.

Duque suspected it was the colonel who led the professor’s kidnapping at Hue before moving to his covert mission in Laos. Ulises never told Kikei, but the colonel and captain Cardenas were secretly working together to capture Quyet Thang.

Cardenas, in turn, suspected Quyet Thang had personally executed the Skyraider pilot at his camp in Bao Cat and later riddled the colonel with bullets during the extraction encounter. It was the guerrilla chieftain’s trademark in dealing with American captives.

Duque, for whom Cardenas had already procured the security clearance for such intel errands, arrived at the morgue under the guise of a medical equipment run. He faked the delivery of a portable autoclave for surgical instruments used in autopsy. The apparatus sat in the back of a tonneau covered Jeep that had been assigned to Ulises for such tasks.

In a sealed envelope Duque carried the orders for lieutenant Santos to hand over the abductee’s documents. Only then would he deliver the autoclave.  It was a swap ritual, devised by the Da Nang spooks for the interchange of work instruments,  diminishing the need for secret code words.

“You get the much-needed autoclave. I get the documents,” Duque said after he had unloaded the apparatus. The lieutenant hesitated a bit, stared at the brand new machine, went over to the refrigerated vault and handed him a weathered leather pouch with the insurgent’s documents.

“I’ll get back to you for this. I’ll extract something from you soon,” the mortician joked.

“My heart,” said Duque. Kikei feigned no to be playful and began unwrapping the machine

In those days Duque was not visiting the Da Nang military morgues by chance. As an added duty, Cardenas’ infantry company needed someone to formally identify casualties at the graves-registration detachment in Chu Lai, another large military compound the Army grunts baptized as Fat City.  The mission was now part of Duque’s weekly rounds as company clerk. He also frequently visited the other larger morgue at the Da Nang naval base where from afar he had once caught glimpses of Kikei Santos. He had not paid much attention to her presence then, nor knew of her duties. Yet, so soon were they to be face to face and their love lives braided.

As she cleaned up and put away the tools of the funerary mask,  Santos became more chatty.

“You know… They don’t tell you these things at closed-door Command Center meetings, but a little math will.  Almost every day in Nam, half a hundred good GIs either die in battle, accidents, by self-inflicted wounds or by a varmint stings.  Do your best to stay out of statistics,” the mortician said as she slowly rubbed hydration cream on her hands. Coquettishly she had her short nails painted pearly white.

“I sure will. And now that we’ve met, more than ever,” said Duque.

Lieutenant Santos gave him a hard stare. “I don’t think we’ve met formally yet. But one cannot expect such formaities in Vietnam.  What did you say your name was?”

“Corporal Ulises Duque. Chief courier for the Papa, Whiskey, Tango companies at Fat City. I do all the paperwork for our executive officer captain Ruddy Cardenas,” Ulises briefly repeated.

“Chief courier, huh?” the lieutenant said humorously. “Well I’m the Lady of the Lamps of the US Army stiffs. You know all that Florence Nightingale kinda crap.”

“Ah, I see you also read the Catcher in the Rye novel, too” Duque said triumphantly.

“Of course, at Honolulu High. Who hasn’t read it?  Anyway, hope you have a security pass. Otherwise you’re not supposed to be here.”

Duque was taken aback by the new attitude.  “I do. I am the captain’s special aide.”

“Yeah, yeah. Your the company mailman. Show the pass to me,” Santos said tersely, lips twisted to one side. Duque pulled out from his undershirt a hanging,  plastified ID card with the security pass.  She nodded and walked over back to the cart on which colonel’s body laid. She checked the mask for consistency.

“Am I supposed to call you mam?”  Duque inquired. His voice carried a tinge of sarcasm.

“Probably. But you don’t need to. Put on these gloves and help me remove the plaster cast. My two Vietnamese assistants are off today. Don’t pull back hard. Just follow my cue as I gently lift up the mask.”

She positioned Ulises across from her on the cart and bent down on the cadaver torso, placing all her fingers at the sides of the cast. The formaldehyde scent in her hair wafted up to Ulises’s nostrils. The sheet covering the body partially slipped off and he could see dry, crusted rings of blood around the bullet holes on the colonel’s chest. Caked hemorrhaging circled the abrasions of the shrapnel wounds. Duque could imagine the agony and trauma of the warrior’s last hours.

“Haven’t had time to cleanse the corpse yet,” said Santos as she expertly began lifting the mask from the top down.

“Very slowly lift up with me until we are in synch for a pullback,” she instructed. They hoisted together and in a few seconds, the mask was off.  To Duque’s surprise, the colonel wore a soft smile on his lips.  He had expected a grimace of torment.

“He actually looks more like Jeff Chandler. You know, the smiling, silver-haired Chandler?” Ulises quipped. “But… that smile…”

“Out of compassion,” she said,” we fix up the faces. Only in certain cases, of course. It’s because some kin insists on an open casket. Or request a mask, as in this case. Both instances are rare but do occur. We’ve even had cases of kin who do not want their dead soldier back. Or, of GI’s put in plastic bag in the battlefield while in a catatonic shock. They later wake up in my morgue. That always scares the shit of me.””

“I wouldn’t want a faux happy face for my burial. Nor my family to stare at my last anguish,” Duque commented dryly.

“Not to worry. You said you’d be out of the casualties statistics.”

“True,” Duque shot back quickly.  He took a furtive glance at his watch. Captain Cardenas was probably wondering of his whereabouts.

“Ah. One more thing I need to do here today,” Santos said. “Bear with me a second.”  She took out a scalpel from a drawer, made a small cut of the colonel’s flesh on the chest area near the cross-chest autopsy incision.  She stored the tissue sample in a vial and into her pocket. “Some more shadowy stuff. I cannot talk about this.”

“Of course,” Ulises accepted. He was about to take leave when lieutenant Santos yawned hard, took off her lab rope and stretched out in a gymnastic-type maneuver.  “I’ve been up with this case since the first rooster crows this morning.”

Duque now got a full breadth of her. Indeed, she was not tall, yet ported a sensually full, curvy figure.  She stared at him groveling over her and he detected a faint smirk as it took shape on her lips. Then, the air around him felt aromatized by mating hormones. Or, at least he imagined so. It was so long now that he had been without a woman and felt drowning in wanton lust.

He shut his mind and was about to leave when she put her hand on his arm. It was not cold, in spite of the refrigeration inside the morgue. In fact, it transmitted a sensual heat into Duque’s body as if she had just inoculated him with strings of  lava flow.

“I like you your conversation,” Kikei said brashly. “It’s so lonely here. This work. You know, the dead and the clandestine. I think we can be friends.”

“Sure, sure enough. Of course,” Duque said with a stumble of words. “We can be tropical confidantes.”

Kikei moved her hand a bit up Duque’s arm, skin to skin almost to the sleeve roll of his jungle fatigue. It was then that he felt her full resonance.  He felt carnal stirrings upswell from her own flesh, somehow controlled yet tremulous, beckoning out from deep inside her body.  Kikei flushed at his realization but it was too late, what her demeanor safely hid, her eyes revealed. 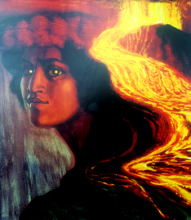 Enclosed in Kikei’s now subdued gaze, Ulises sensed  a mosaic of ardent longing. A subdued but strong urge for attachment, deceptively shrouded yet perceivable by the primal instinct of a man on the prowl.

It seemed to him at least a call for intimate cordiality, or at most, a fiery passion. It pulsated under her skin in an invisible yet harmonic cadence. Perhaps somewaht like submerged lava curls trapped in the underwater caverns of the dormant Loihi seamount. Silently torrid, muffled but igneous, ready to eject from the core body of an aroused, enkindled Hawaiian goddess.

This site uses Akismet to reduce spam. Learn how your comment data is processed.