After a sniper shot put Duque down, the peculiar battle of the remote hamlet on the ridges of the Annamite Mountains took on an offensive intensity.  Inside Duque’s throat, the made-in-China slug seemed alive and burning.

Transfigured for a mere instant, he was now an injured body and it began to ache intensely. He gasped for air, yet with a certain sentiment of honor.  The annals of the war in Vietnam would jot him down in a footnote for being the first casualty of the assault on Bao Cat.

As he began to shake away such vain thoughts, three more shots hit the ground around him, no doubt aimed at the nearby machine gunner.  It was then that Charlemagne Papio Pina, nicknamed Pap Eye  –because soldiers usually baptize each other with suitable battlefield monikers– snapped out of his stupor. He moved forward towards the gate, knelt on one leg and let out a long blast of suppressive fire with the M-60.  He then hit the ground low again and reloaded another belt of ammo.

The platoon a few meters behind Duque and down the sloping path began to cautiously flank the hamlet through taller foliage. They also let go of a rapid rifle fire sequence and pistol volleys. Soon Ulises heard the double zoot-zoot of Jairo Jaramillo’s grenade launcher followed by explosions behind the village pig pen. The attack maneuver, led by the feisty lieutenant Jeremy Popper began at last to garner some operational unity.

“Free fire. Open fire. Move to the quarters,” Duque could hear Popper desperately screaming orders. Under the protective volley, Papio anxiously crawled back next to Duque and wrapped a sweat towel around his neck to hold the bleeding. He then moved nearer to the gate entrance and let out a few more bursts of machine gun fire.

Bullets zinged all around the hamlet, ricocheting off the volcanic boulders or swallowed swiftly by the thin, straw walls of the huts. Clay pottery atop rustic benches at the central plaza split up into fragments as straw baskets tumbled in shatters to the hard ground.  A hog, half his snout blown away by shrapnel, ran around crazily, squealing in pain. Chicken, geese, ducks and an old rooster sought refuge in the shrubs.

Ulises did another eye search for the sniper. No sight of villagers anywhere. He got the sense that the villagers and custodial guerrillas were now in deep trenches, in tunnels or sniping from atop the thicker trees above the ridge.

Immediately after the apparition vanished, Ulises felt another terrible pang in his Adam’s Apple and his throat became engorged with saliva. Drivels of blood burped out one side of his mouth.In this new death throe, the bridled poet in him sprang loose. Just his luck  –Duque fancied– a young life oozing vitality into the crystal brook that sprang out from the thick jungle, streaming down hamlet rivulets, past gigantic boulders and cascading to the river valley below. He imagined the waiting waterways beneath him carrying his lifeblood eastward towards the China Sea, on to oceanic currents, home to Caribbean waters.

Duque fantasized how once in the Mekong Delta, his life sap may retrace north and taint crimson the River Sai-Gon. The majestic Song Sai-Gon. Vietnam’s waterway of life. Just last summer the backdrop for his love days with Kikei Santos. The setting for his Saigon Song to her heart.

Murky, pongy Sai-Gon waters. Since time immemorial, Vietnam’s riverine artery  –always boggy and clouded with the blood of its ancestral poets and patriots.  A liquid potter’s field to now rest the vital fluids of Ulises Duque, the willing musician of war, the reluctant warrior. The puny soldier who in a downcast, gave up his soul to die as a scorned lover. Or was it for spite?  Effrontery?

Drowned in such thoughts, Duque began to shiver in pain. So little time left to figure it all out. He sighed deep and silent, seeking to calm his drumming heart.  As spirit and body wrestled to let each other go, Ulises yearned to compose what he expected to be his last sanguine song. A cadence to languishing anatomy.

Instead, a big sob assembled in his throat, refusing to escape. Desperate, he searched once more in the sky for the monk’s spirit. He ferreted around his mind for a pitch, a few clefs.

Amidst the dead tree limbs dangling from escarpments and ridges fringing the Laotian border, Duque heard instead only an ancient requiem for soldiers fatally shot in battle. The providential hymn to the futility of dying without a gallant fight. A dirge to the estrangements of war and the breaking of hearts.  All sung at Bao Cat by a choral of Cambodian vultures.

He stared in angst at the expiry birds, sitting there stoic and stern like as if on jade choir stalls and the greenish misericords of a jungle cathedral.

“God!  How long would it be to the end?  Rigor mortis will soon set in by this bamboo gate and crumbling monkey bridge and to what purpose?” he cried to himself. 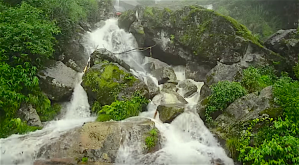 “Bao Cat… Truly not a quaint place to die,” Duque cursed under his breathe.  No strategic value.  A place not even found in ancient Chinese maps.

A futile war trophy for captain Ruddy Cardenas. A deathbed for the Tango troop emsemble.

“My invisible God,” Duque mumbled on, “what disrtoted rules of military engaement? What coils of twisted intel brought me here to die?

To get to Bao Cat in search of the guerrilla commander Quyet Thang, Duque plied all summer through piles of tattered Viet Minh war chronicles. Most narrated chronologies about nationalist rebellions in colonial Vietnam. He also peered deep into piles of French annals postdating the Second Indochina War. On the behest of captain Ruddy Cardenas, Duque teamed up with lieutenant Boi Pham Nguyen to help expand the fields of scrutiny into Vietnamese rebellion history.

The tall, boney South Vietnamese translator and Army of the Republic of Vietnam propaganda officer, diligently trained with the US Army to do profile intelligence on suspected Viet Cong partisans. Patriotic and pledged to fight Communism to death, Boi took to the task with fervor. In turn, Cardenas recruited Duque because besides musical skills, during his final college studies in antropology, he also specialized in paleography and monastic scriptoria.

With Duque’s working knowledge of French and Boi’s polished translation skills, both did systematic content analysis on countless  captured rebel diaries and Viet Cong battle logs, put together by leather-tough rebel leaders who later the French Sureté decapitated; or, by Viet Minh cadre, still wasting away in military prison camps all over Saigon.

At his deathbed at Bao Cat, Duque could no longer remember how many frayed maps, propaganda pamphlets, civil registries or arrest and interrogation records they examined, as the pair funneled their way into shuttered, dark and damp colonial Sûreté générale indochinoise police stations in Saigon.

Quyet Thang, Cardenas knew, was a Nome de Guerre for the Viet Cong cadre.  Thus, the captain became frenetical about profiling the true identity and the elusive chieftain’s whereabouts. To Duque, it seemed the crafty guerrilla honcho had somehow designed the optimum hideout in the jungle and a unerring masque for his combatant persona.

Thang, as a teenage anticolonial radical in 1954 –Duque found out in the logs– escaped from the infamous penal colony of Paulo Condore disguised as a woman. He since had been on the run, in charge of underground political guerrilla cells and roaming assassination squads.

By the end of that 1967 summer, still clueless of his prey’s bearings, Cardenas  –by his own right a savvy US Army field intelligence officer– then ordered  Boi and Duque to visit remote battle sites wherever testimonials pertinent to Quyet Thang could be jerked out of shady  informants, or too eager Viet Cong deserters.  All to no avail.

Cardenas always carried a leather pouch filled with covert military intel charts that everyone in the troop figured had tacks for the location of elusive guerrilla bosses. All except Thang.  Duque knew the entire Tango company secretly hoped that all the haphazard intelligence would finally convince the captain that Thang was so invisible because, in fact, the rebel commander lay buried in an unmarked tomb, somewhere in a  remote communal cemetery behind a jungle hamlet.

“No sense in hunting down a ghost, captain,” Duque heard the captain’s commanders tell him on a few occasions. Twice he was ordered to end his obscure mission, disband the Tango field company, return its soldiers to their original units and let them while away in garrison their few remaining weeks or months in Vietnam.  Except Duque, who was a new arrival.

Cardenas would not concede. Duque sensed in him a rage. An urge for reprisal. The captain continually proclaimed the cunning Viet Cong commander to be alive, needing prompt capture and humiliation. It all seemed to Duque a dark and personal foaming of the soul.

The annals described Quyet Thang as responsible for a rash of executions in early 1967 of top US and South Vietnamese military officers. No one in the troop knew it, but one of Thang’s targets had been Cardena’s uncle, a wily infantry top sergeant who wandered in Pleiku too close to one of Thang’s clandestine operational premises.

Duque also knew the captain wanted eagerly to gain track as a apex field intelligence officer in Vietnam. He felt passed by or diverted from promotions by top brass on too many key occasions. To Duque’s surprise Cardenas was openly chagrined and vocal about it.

Crumpled but not beaten, an impatient Cardenas who also had honed himself in psychological warfare during his second tour of duty in Vietnam,  turned then  to less earthly intel sources. He shifted the quest for Thang towards the portals of the Vietnamese spirit world.  A phantom chase that eventually led to Bao Cat.